What am I ?
May 14, 2010
Hello, I spotted this bee type thing on the island of Skiathos in Greece in 2008, I have tried on many occasions to get it identified, I even contacted the Natural History Museum in Athens and they couldn’t help me, it was approx one inch long, and was spotted in the same area as some Honey Bee Hives, close to a monastery. Have you any idea what it is ?
Thank you
Ian Reed .. UK
Skiathos Greece 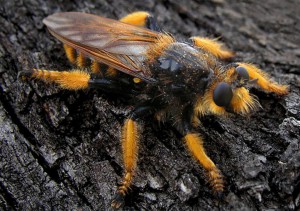 Dear Ian,
We are amused that the Natural History Museum in Athens was unable to identify this Robber Fly to at least the family level.  We believe it is a Bee Killer in the genus Mallophora which is described on BugGuide as being:  “Large, fuzzy, bee-mimicking robber flies. Resemble Laphria, another genus of robbers that mimic bumblebees, but is even hairier and has antennae with a very thin terminal final segment, whereas Laphria has thick antennae.”  It is quite difficult to make out the antennae on your photo.  We have been unable to determine if either genus, Mallophora or Laphria, is represented in Greece, so this Robber Fly may actually be classified in a different genus.  Interestingly, the Dictionary of Greek Mythology website has a webpage devoted to Demeter or Ceres, the goddess of agriculture, that contains this information regarding other titles by which the goddess Demeter might be invoked:  “Mallophora (Μαλλοφόρα). “Wool-bearing.” An epithet as worshipped at Megara, whose inhabitants she was fabled to have taught the use of wool (Pausanias. i. 44).”

Correction courtesy of Karl
May 19, 2010
Hi Daniel:  Laphria flava occurs throughout Europe, including Greece. The species is rather variable in appearance but the ‘Insects of Europe” site has three images that look pretty much identical to this one (about a third of the way down the page). Regards. Karl

3 Responses to Robber Fly from Greece