#9998: Carrion Beetle #10,000: Mystery Beetle from Hawaii may be Callirhipis cardwellensis

Damsel fly?
May 13, 2010
Here again is another bug we had the pleasure of seeing in the Porcupine Mountains in August. This one, I also searched in the Kaufman’s field guide to North American insects but was unable to find. If you could help with this as well, my family and I would greatly appreciate it.
Amy Padgett
Porcupine Mountains, Michigan 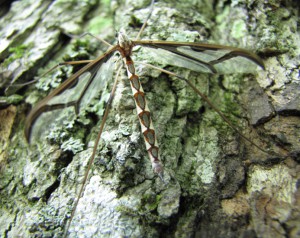 Dear Amy,
You have the distinction of being our 10,000th posting.  This lovely and gangling creature is a Giant Eastern Crane Fly, Pecidia albivitta.  We identified it on the Crane Flies of Pennsylvania website pretty far down the Limoniinae page where this information is provided:  “This is one of the most conspicuous and beautiful crane flies in Pennsylvania.  It is common and widely distributed throughout the northeastern United States and Canada.  The adults are on the wing in June and again in September.  Crane flies of this group can be distinguished from all other adult crane flies by the dark brown triangle on the wings.  A dark costal margin, a broad seam along vien Cu, and a similar dark seam along the unusually oblique cord form this triangle.  The females reach the large size of 35 mm, while the males are slightly smaller.  Abdomen is whitish gray in color, the tergites with triangular or diamond-shaped darker gray patches that are bordered by rusty yellow.  The adults can be found in moist woods, boggy areas, cold springs, saturated springy hillsides, along streams and shaded tributaries where the aquatic carnivorous larvae develop.  Larvae of this species have creeping-welts on abdominal segments 4-7 and live in the edge of cold streams.”  BugGuide has many submissions of this species.

Ed. Note: We actually miscounted.  This is really our 9999th post.