tiny bugs all over the yards and in the house
May 2, 2010
First there were tiny bugs everywhere in the front yard and yards nearby, now they’re on the floor walls and ceiling of house, mostly kitchen. Spreading like crazy.
richard
San Diego Ca. 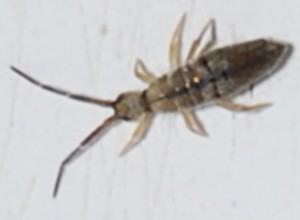 Hi Richard,
This is a Springtail, and they are believed to be the most numerous hexapod (six legged arthropods including the true insects) on the face of the earth.  They are in the class Collembola, and they are primitive creatures that were originally considered in the class Insecta.  According to BugGuide, it is estimated that there are over 250,000,000 individual Springtails per acre, so if you couldn’t find any, it might be cause for concern.  According to the North Carolina State University website, “They live in a variety of habitats where they feed as scavengers on decaying vegetation and soil fungi. “ The University of Florida Institute of Food and Agricultural Sciences website indicates:  “They occur in large numbers in moist soil and are found in homes with high humidity, organic debris, or mold. Homeowners sometimes discover these insects in large numbers in swimming pools, potted plants, or in moist soil and mulch.”  Other than being a nuisance because of large numbers, Springtails are benign creatures, but their presence in large numbers in your kitchen may be symptomatic of an underlying mold problem. The University of Florida website also indicates:  “Springtails are pests due to their large numbers. They do not bite nor transmit diseases. They can easily climb the sides of houses and are attracted to lights. They can also be brought into homes in the soil of otted plants. Overwatering encourages springtail propogation. Homeowners may first encounter springtails inside the home. The insects invade buildings in times of dry weather or heavy rains. They may also breed indoors with high levels of humidity that occur near leaks and cracks to the exterior. Because of their attraction to lights, they may enter homes lured by light shining through cracks under doors and windows.“ The website offers this advice for control:  “Springtails cause no problems inside the house. They are so small that they can’t really be removed with a dustpan and broom. But they can be knocked down by misting the areas where they occur with some dishwashing soap in water (about 1%). Sometimes, springtails are brought into the house on potted plants. Check plants for springtail activity before bringing them into the house. If springtails are active, let the soil dry outside for several days before bringing the plant indoors. Do not overwater plants inside the house.  Sometimes, springtails enter the house through small cracks and crevices, under doors, or through windows. Seal cracks and crevices with caulk. Weather strip around doors and windows. This will not only seal access of springtails from the outside but will also keep humidity and moisture out of the house. This all will help control springtails.”