April 24, 2010
Last weekend I took the last ten fledgling angelfish to Tropical Imports and traded them for a new timer.  The growout aquarium still has three gold angelfish as well as the striped runt from last summer’s spawnings.  Then I captured 5 of the largest fry that are being raised by Lefty and Digitalis and I moved them into the growout aquarium.  They are doing well with their older siblings, though they may be older cousins.  I do not keep track of the parentage once the fry are moved to the growout aquarium.  I just caught 6 more fry and they are acclimating to the water change before I release them into the growout aquarium.  I hope to move several additional batches of the larger fry to thin out the ranks in the parent’s tank.  Lefty and Digitalis are feisty and protective parents.  They splash water out of the aquarium when I feed the fry, probably because they remember loosing their previous generations of fry to the net.  These fry were spawned on February 24 and became free swimming on March 2, so they are nearly two months old.  I will try to take some photos to add to this posting. 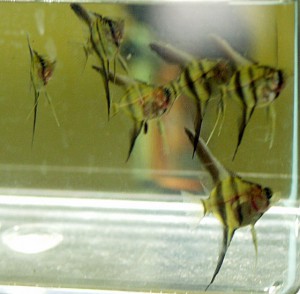 I am going to release the six fry and then attempt to capture more.  The fry have grown at a disproportionate rate, with some looking many weeks younger and barely assuming the shape of an angelfish.  The largest and most aggressive feeders are being moved out to give the smaller fry the opportunity to grow.  It is also the only way to count the fry by catching them is small batches and adding up the numbers. 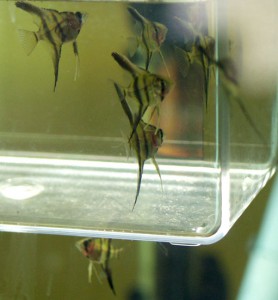 The fry that were moved last week and the larger relatives are curious about the new arrivals. 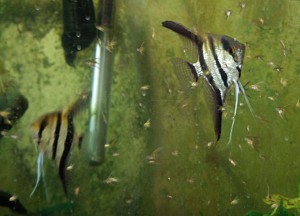 Lefty (on the right) and Digitalis guard a large brood

May 1, 2010
I never finished last week’s posting, and now I am not certain of the number of fish I moved.  I am nearly certain I caught 9 more, raising the total to FIFTEEN (15) Fry moved last week.  I just caught 5 more today and moved them.  Upon counting the fry in the growout tank after the move, there were 4 older siblings and 24 younger siblings (though by my own count there should be 25).  I doubt that I could be certain of that number.

Our Nitrites Have Dropped!!!!!

Our Angelfish have Spawned!!!!!

Our Angelfish have just spawned a second time