Spider from Columbia made it to the USA!
April 22, 2010
I work in a facility in the USA where we ripen bananas. First off, this is one tough spider. It has traveled thousand of miles at sea, was jostled around within a 2000lb pallet, suffocated with ethylene gas for 24 hours which is used to replace oxygen and start the ripening process of bananas, dodged fork lifts with banana pallets on them only to be swept out of a ripening room by me. I stopped the instance I saw the dust pile moving and quickly got two cups and a bunch of tape to snatch this spider up. It isn’t in the best of shape which I blame myself for but it’s still kicking! I believe it is of the huntsman group. As far as I can tell it is not a Brazilian Wandering Spider. Leg span from front to back is about 1 1/2 inches. it has been given a meal worm and a cricket but hasn’t snatched either up. Any info would be great!
James Price
COLUMBIA (but discovered in the states) 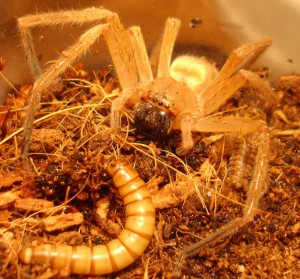 Hi James,
The Huntsman Spider Heteropoda venatoria has multiple common names including Banana Spider, the most appropriate name for your individual.  Banana Spiders got this common name many years ago exactly because they entered distant lands on banana boats, often cropping up in grocery stores when the shipment was delivered.  They are often mistaken for Tarantulas.  The Banana Spider now has a nearly worldwide distribution, especially in warm port towns where it can survive and reproduce.  The Banana Spider is harmless, and it is a shy nocturnal hunter that does not build a web and will eat all the night prowling Cockroaches it encounters.  Compare your photos to this one on BugGuide where it is indicated:  “Non-native, introduced from Asia, possibly on bananas. Apparently spreading into the US from warmest areas.”  We love your eye witness account. 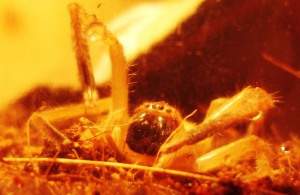