OIF mystery
April 21, 2010
I am currently stationed in Iraq, near the town of Sinjar, approximately 30 Km due east of the Syrian border in Northwest Iraq. I was sweeping the patio area when I heard a loud buzzing and this critter made a crash landing into my head. We had just had a dust storm and I landed in a pile of dust I had just swept up after he hit me. He was approx 2 inches long, had a teal/green, iridescent shell with BRIGHT yellow wings under his shell. When I tried to help him out of the dust pile he froze up and put his front two legs in the air at me sort of like a challenge. I “think” based on the pictures in your site that he is a kind of scarab beetle, but I couldn’t find a picture of one this vibrantly colored. Help bug man! Thank you!
SGT S
Northwest Iraq 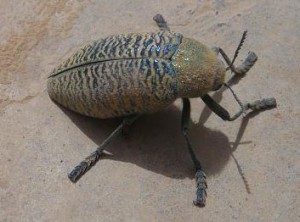 Dear SGT S,
Your beetle is one of the Metallic Wood Boring Beetles in the family Buprestidae, which are sometimes called Jewel Beetles.  Perhaps one of our readers will be able to supply us with a species name, but if they do, chances are good there will be no common name, and the species name will be polysyllabic with letter combinations that are rarely found in words that are typically used during conversations. 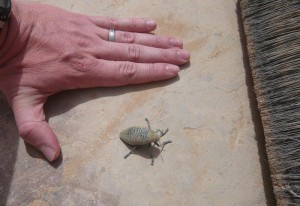 Mole Crickets and Toe-Biters are the most common submissions we receive from the Middle East. 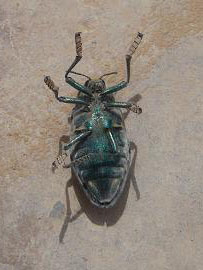 Update: February 16, 2011
Thanks to a comment from wildabug, we are able to link to a Royalty Free Stock Photo of Judolis pubescens.

Update
How can I send identification?
Website: http://utenti.romascuola.net/bups
May 10, 2011 12:42 am
Hello. I tried to send the identification for the beetle from Iraq depicted at this URL: 2010/04/21/jewel-beetle-from-iraq/
but I was unable to do it. I tried to register, but without result.
However, that specimen belong to this species:
Julodis audouinii Laporte & Gory 1835 – Coleoptera Buprestidae, Julodinae.
It lives in Iraq, W. Iran and SE Turkey. Larvae live in the soil eating roots, and adults go on any species of little tree, bush and also herbaceous plants, eating leaves and green bark of young twigs.
Signature: Maurizio Gigli

Thanks Maurizio,
We have posted your identification and linked to your website as well.

Jewel Beetle from Tanzania may be Steraspis speciosa

6 Responses to Jewel Beetle from Iraq