Massive swarm
April 13, 2010
We were hiking the highest ridge in Friedrich Wilderness Park, just northwest of San Antonio, when we encountered a large swarm of small black insects covering the limestone rocks. This is the video I took of their swarming behavior: http://www.youtube.com/watch?v=ALFe1ul5Qa4
This was in early January, but the weather was unseasonably warm, probably near 70 degrees F. It was late afternoon, and the trails were very muddy from recent rains. The altitude there is about 1200′.
The insects themselves were very small, maybe 1/8″ long. I couldn’t get any idea of their appearance until I zoomed in on the digital pictures I took–it should be Image 2 here.
I sent this same information to a local entomologist, but never got a reply 🙁
John
Northwest of San Antonio, TX 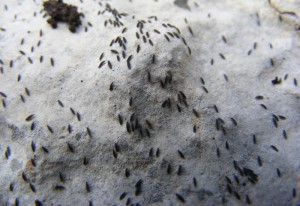 Hi John,
You had an encounter with Springtails, most likely in the genus Hypogastrura, which includes Snow Fleas and which can be viewed on BugGuide.  Snow Fleas can be found on sunny days during the winter, often congregating on the surface of the snow.  Entomologists are often quite busy with their jobs, but amateurs like us do this as a labor of love. 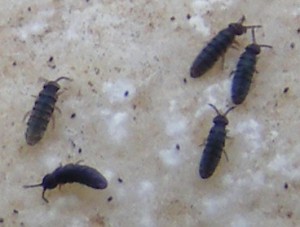