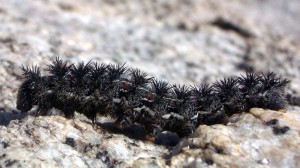 Dear John,
Your caterpillar is a Juno Buck Moth Caterpillar, Hemileuca juno, which is described on BugGuide as:  “early instars all black with branched spines arising from tubercles on all segments; final instar densely speckled with white, giving overall grayish appearance, except for reddish tubercles.”  BugGuide also indicates it is found from  “New Mexico to southern California, south into western Mexico” and the habitat is “desert scrub and mesquite woodlands; adults fly during the day but are also active at night and come to light.”  Finally, “adults fly from September to December larvae from April to June.”  We do not like posts with more than one species, so if you want us to take the time to identify your beetle (yes our research does take time) please resubmit the photo with more information.

Probably Giant Silkmoth Caterpillars in the genus Arsenura from Brazil