What is this bug?
April 5, 2010
I discovered this creature on my bed. I originially thought it was a tick or a bed bug, but it seemed too large and also has six legs. It is dark brown with black spots outlining its body. It seems to move slowly, as it remained in the same place all day. What is this beast?? Help!
sam&elm
South Alabama 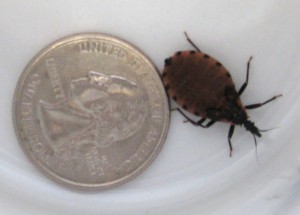