Cocoon with raised circular bumps
March 28, 2010
Hello Bugman, from across the pond. I spotted this cocoon, attached to a branch of a 2 year old Hebe, and can’t find out what it is. It’s about the size of my thumb, but fatter – completely secured along it’s length to the branch, and looking very solid. The small circles on the outside are almost like little hatched eggs – these have confused me, as whatever is inside would have had to crawl in after making them, rather than spinning a cocoon around itself? It is as if it needed extra armour. Inside is something which is filling the whole cavity, and looking a bit furry 🙂
Luigi
Surrey, South East England 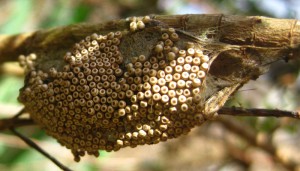 Hi Luigi,
This is a most interesting situation.  Before we saw your location was England, we were certain that this must be a Cecropia Moth Cocoon.  It is actually a Small Emperor Moth Cocoon, Saturnia pavonia, which can be viewed on the Moths and Butterflies of Europe and North Africa website.   Eggs are typically laid in neat rings around the twigs of the food plant, and it seems like the moth that emerged from this cocoon was a female and she laid her eggs on her own cocoon.  We are going to contact Bill Oehlke with this unusual situation and he may request permission to post the photos on his own website. 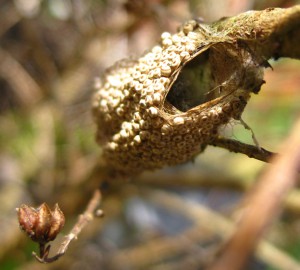 Correction:  Rusty Tussock Moth Eggs and Cocoon
March 28, 2010
Hello,
These are not the eggs of a saturniid but rather the rusty tussock moth (Lymantriidae: Orgyia antiqua), which is native to Europe but is now found throughout North America and elsewhere.  It is typical of this species and a number of other tussock moths for the eggs to be deposited right on the female’s cocoon, because the females are flightless.
There is a photo similar to these in my new book, “Tracks &amp; Sign of Insects and Other Invertebrates,” which I think y’all might enjoy.  There is some information about it here: http://www.northernnaturalists.com/invert_tracks.html
Cheers,
Charley

Ed. Note:
We found a matching photo on Wikipedia.

Thank you so much for your reply – that’s really interesting.  I’ve just had another look at it, and there is definitely something still inside the cocoon, so the moth has not yet emerged (I see that the UK flight time starts in mid-April).  I haven’t noticed any larvae of the kind, and no larvae damage to the plant (a Hebe). I wonder if something else entirely has laid its eggs on this cocoon?

4 Responses to Rusty Tussock Moth Cocoon and Eggs from England