Toe-Biter from Argentina: death by trauma Winter Stonefly or Snowfly

A Strange and colourful beetle – What is it??
March 21, 2010
I found this cluster of beetles in Cancun Mexico this past week. I found them in the late morning, and I would have been scared by their size (about as long as my thumb) if they weren’t so beautiful! I’d love to know what they are and any extra information about them!
Bekki
Cancun, Mexico 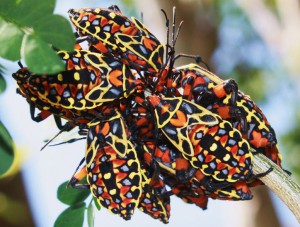 Hi Bekki,
This is not a beetle, but rather a true bug in a different order.  These are immature Giant Mesquite Bug in the genus Thasus, but we are not certain if it is a different species, or a subspecies, or merely a color variation of Thasus neocalifornicus, a species found in Arizona and California that is represented on BugGuide.  We suspect it is either Thasus acutangulus or Thasus gigas, both of which are found in Mexico.  A Threatened Edible Insects in Hidalgo Mexico website indicates the following about Thasus gigas:  “Xamues (Thasus gigas Burm.) (Hemiptera-Coreidae)  Thasus gigas live in the “mezquite” tree (Prosopis juliflora (S) DC), their only host, and are also known as the “mezquite worm”. The species was very abundant in this area, but now that a larger number of adults and larvae are gathered for sale rather than for personal consumption, the abundance of this species has declined. This species is univoltine, and it is collected in the spring [14]. Elderly people in the study area who eat this species, say that they can currently only find few specimens at a time, allowing a one to two month supply, while in the past they could gather enough to feed on for six months. They refer to this species as the “meat we eat”. This insect is greatly appreciated because of its sweet taste, which is rare in the rural areas. After they are gathered, the insects are dried on a griddle, stored in plastic mesh bags, and hung in the kitchen where they provide a daily meal.”  Additional searching leads us to believe that this may be Thasus acutangulus, based on the photo of an immature specimen on the Alex Wild Photography website.  There is also a photo on Flickr.

Giant Mesquite Bug: adult and nymphs (and it's edible!!!)

One Response to Giant Mesquite Bug Nymphs from Mexico