March 16, 2010
Lefty and Digitalis laid eggs on February 24, and the hatchlings began swimming on March 2.  They have been swimming for two weeks, and there seem to be about 100 fry.  They are not all growing at the same rate.  I feed them newly hatched brine shrimp and frozen baby brine shrimp at least twice a day, and on days that I don’t have to work, I feed them four or five times a day.  Since the young have been swimming freely for two weeks, I expect that their chances of survival are good.  Last weekend, I took 12 of the largest fledgling Angelfish that were born last summer to Tropical Imports and traded them for $30 of food.  If the current youngsters grow at about the same rate as their older siblings, I will need to move them out of the aquarium they currently share with the parents and into the grow out aquarium in about a month.  At that time, I may need to have traded in all the older siblings. 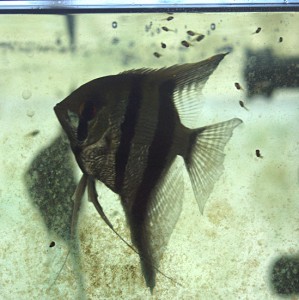 Lefty and Digitalis have a large hatching