Is this a tick?
March 7, 2010
I found this on the front sidewalk. It moves slow and you can hardly see its legs. It is the color of dirty khaki. It looks like a tick, but is nearly as big as a dime. The usual ticks we see here in Colorado are much smaller and darker in color. The pictures with a small piece of bark are of the belly and the other of its back.
Nancy
Boulder CO 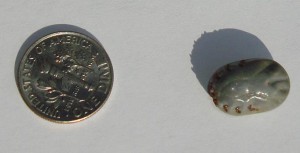 Hi Nancy,
You are correct.  This is a Tick and it appears to be engorged with blood.  According to BugGuide:  “Hard ticks have three distinct life stages. Larvae emerge from the egg having six legs. After obtaining a blood meal from a vertebrate host, they molt to the nymphal stage and acquire eight legs. Nymphs feed and molt to the next and final stage (the adult), which also has eight legs. After feeding once more, the adult female hard tick lays one batch of thousands of eggs and then dies. Only one blood meal is taken during each of the three life stages. The time to completion of the entire life cycle may vary from less than a year in tropical regions to over three years in cold climates, where certain stages may enter diapause until hosts are again available. Many hard ticks can go for several months without feeding if not unduly duressed by environmental conditions.“

One Response to Tick