Yellow caterpillar with long lashes and longer black tufts
February 26, 2010
Hi, WTB,
Again, from last summer (2009), a solitary larva (probably the same individual in these two images taken within an hour at the same spot) in late June.  Length (without hair), not quite 2″.  Southern Arizona; Santa Rita Mountains, between 5,100′ and 5,400′.
Denny 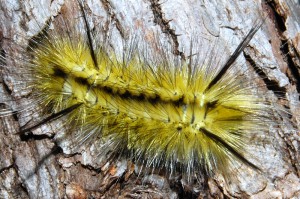 Hi Denny,
Sorry about the delay in responding, but our free time seems to have vanished with several looming deadlines and a great deal of job responsibility.  This is some species of Tussock Moth.  It greatly resembles the caterpillar of Halysidota tessellaris, the Banded Tussock Moth, but we don’t believe Arizona is part of the range of the species according to BugGuide. BugGuide also mentions a very similar species in the Southwest, Halysidota schausi, but there is no photo.  We followed a link to the Butterflies and Moths of North America, but only a photo of a mounted adult is pictured on that site. 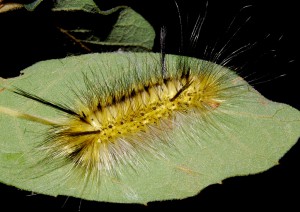 Hi, WTB,
Thanks for the info.  I’m running into the same sorts of non-definitive IDs (and in a couple of other places) that you encountered.
The area where the caterpillar was observed is a “destination” for birders, and it has a fairly constant flow of automobile traffic from all over the country throughout the year.  Perhaps a stowaway from out of the region.  This was the only example that I observed at that time and during the many days (over several months) that I spent there last summer.
Again, thanks.
Denny