A Snowfly, and some unrelated Cocoons

fly emerging in winter?
March 2, 2010
hi – my girls and i found the cocoons in the first picture hanging on a guardrail next to the river. the second picture shows the insect we found (we found many) near the cocoons. we also saw them roaming around in the snow. these photos were taken in February, in SE Ohio.
Thank you! Debra
SE Ohio, North America 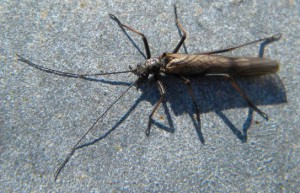 Hi Debra,
The cocoons you found are unrelated to the Snowfly, a Winter Stonefly.  We made the Snowfly our featured Bug of the Month this month, and your query is the third we have received in the past few days picturing this interesting creature that is often found in great numbers atop the snow.  The Fish BC Entomology page, that is devoted to insects used by anglers to catch fish, clarifies why the Cocoons you found in the vicinity are unrelated.  Stoneflies undergo incomplete metamorphosis, and they transform from aquatic nymphs to adults without a pupal form.  We believe the Cocoon are most likely Bagworms. 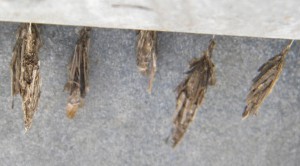 thank you….i did find that – for some reason my search took me to your “submit” page and i just went with it!! sorry for taking your time, but thanks for the information.

No Problem.  Your letter is great because we like our readership to know that many insects can be found during the winter.

Species Identification thanks to Eric Eaton
March 17, 2010
Hi, Daniel:
The March 2 “Snowfly,” which was posted with a “Snow Flea” is actually a rolled-winged stonefly in the family Leuctridae.  That post was from southeast Ohio.
Otherwise, terrific work!
Eric