What’s That Bug?
February 28, 2010
Found this on the side of the house approximately 2 inches in length was using the long protrusion from it’s rear to poke into the little holes of the brick. Notice the stinger on it’s rear also.
KG
Defiance, Ohio 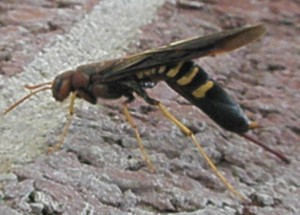 Dear KG,
This is a Pigeon Horntail, a type of Wood Wasp, and its behavior is highly unusual.  The protrusion is the female’s ovipositor, and she uses it to deposit eggs beneath the bark of diseased, dead or cut wood, so there is no real reason for her to be poking around your bricks.  Even more unusual is finding her in the dead of winter when there is considerable snow on the ground in Defiance, Ohio.

Ahhhh thank you very much sir, i took this photo last summer was just looking through my pics and wondered if there was a site that could tell me what this was (good name for your site btw) : ) I have a photo of another bug with a long nose i don’t know what it is, if you’re interested if not i won’t bug you. : )