Green, large Moth.
February 21, 2010
This thing careened into my kitchen last night and started laying eggs. It’s about 5 inches in length. The photos are a better description than I could ever give.
Nina
Northcote, Auckland, New Zealand 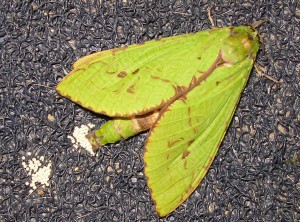 Hi Nina,
Though there is considerable variation in the markings based on photographs online, we are confident that this is the Puriri Moth or Ghost Moth, Aenetus virescens.  There are many Maori names for the largest moth native to New Zealand, and found only on the North Island.  These names include pepe tuna, mokoroa, ngutara and pungoungou according to the Insects and Spiders of New Zealand website which includes the following facts:  “is the largest moth in Aotearoa / New Zealand, and is found only on Te Ika a Māui / North Island;  relatives live in Australia, New Caledonia, and Papua New Guinea;  caterpillars start life living in a bracket fungus;  older caterpillars make a refuge tunnel in the trunk of a large tree;  caterpillars feed on the wound tissue of the tree around the tunnel entrance, which is concealed by a silken ‘tent’;  pupation occurs in the tunnel;  adult moths do not feed, and live only for a few days;  moths are active at night.”  The New Zealand Farm Forestry Association website has wonderful photos of the life cycle, including caterpillar images.  The New Zealand Tramper website has an image of a living moth that more closely resembles your photograph than most of the other online images, though it has more markings than your specimen.

Giant Stonefly with Eggs from Canada