Lefty and Digitalis have 8 swimming fry
February 20, 2010
Two weeks ago, Lefty and Digitalis laid eggs on the filter intake pipe again.  They have been laying eggs every two weeks since last year when their second brood was removed to the grow out aquarium.  The eggs either have grown fungus, or the fry have died before becoming free swimming.  Two weeks ago, I collected rain water for addition to the aquarium (about 4 gallons) and I began feeding the pair some live mosquito larvae that developed in an outdoor water storage area.  When the eggs hatched, I shut off the filter to prevent the wrigglers from getting sucked in.  The pair moved the wrigglers between a plant leaf and the pipe for several days.  Three days ago, the young started falling from the pipe and were captured in the parent’s mouths and returned.  I decided to hatch some brine shrimp just in case.  Three days ago, the fry started swimming some.  There were about 20.  Two days ago, after a day of swimming, the parents collected the fry to spend the night on the driftwood branch that has replaced the dying Amazon Sword Plant.  I also tried to remove as many tiny snails as possible, though that is a losing battle.  Yesterday, there were only 8 fry remaining, but they are swimming and eating newly hatched brine shrimp. 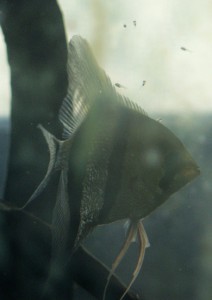 Digitalis with some fry

I am finally ready to post some new photos of Angelfish fry, and I am hoping these 8 guys survive.  I am at least encouraged that my Angelfish may start to produce broods of young again. 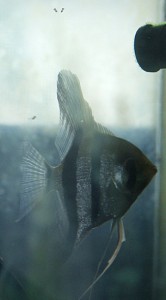 I never figured out why the eggs of either pair were not viable between September and January.  I am not sure if it is water conditions, or diet, but whatever the reason, things may be turning around. 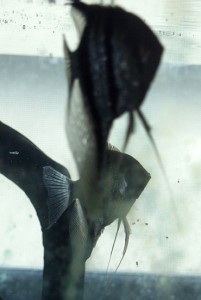 February 23, 2010
The day after posting, the number of swimming fry dropped to only 4, but they are still alive and eating well.

February 26, 2010
Two days ago, Lefty and Digitalis laid more eggs on the filter intake pipe.  This morning the hatched wrigglers were moved by the parents to the driftwood.  There are still four remaining fry, so it will be interesting to see what happens with two broods in the same aquarium.  Perhaps I should move the four larger fry to the nursery aquarium, but I feel I should let nature take its course and trust that the parents know how to deal with older siblings.

March 2, 2010
Alas, there is but one remaining fry from the first recent spawning, but there are about 100 new small fry that are just beginning to swim.

Some Fry Get Moved; Boris and Media Luna spawn again

Aquarium Update: Boris and Media Luna spawn on glass and Lefty and Digitalis care for their fry