Mystery Bug with Pincers and Long Stinger
February 4, 2010
We’ve found bugs with boxing-glove pincers which unroll into giant jaws. See attached photos. We’re in a house in Jakarta, Java, Indonesia. Have found two of them so far. We’ll keep the lights on until you tell it’s safe. Can you help identify it?
Brits and Red Socks abroad.
Jakarta, Java, Indonesia. 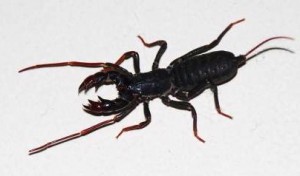 Hi Brits and Red Socks abroad,
This is a harmless Whipscorpion in the order Thelyphonida.  They are also called Vinegaroons because they release a weak acetic acid when threatened, and it smells like vinegar.  Since they have no venom, Whipscorpions are perfectly harmless, despite resembling scorpions.  You may read more about Whipscorpions on Wikipedia, and we also found an Indonesian website called Greater White with good photos.  The drawing on Wikipedia resembles your specimen, and it is from the genus Thelyphonus.  There are several Indonesian members of that genus.  The jaws you describe are actually modified legs known as pedipalps.  We are thankful for your awesome images that document the two positions of the pedipalps.  Since Vinegaroons are harmless, and they are nocturnal hunters, it is safe to turn out the lights when you sleep.  The foraging Vinegaroons will help keep the population of cockroaches and spiders to a minimum. 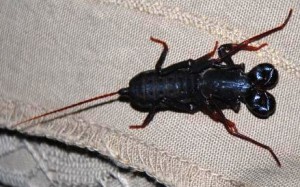 Dear Daniel,
Thank you very much for this awesome answer. “Whipscorpion” is such a great name!
The photos I sent to you were very low resolution. If you would like better quality ones for the records, I’d be happy to whisk them over to you this weekend.
Very best wishes to you and the bug team. And thanks for inspiring a sudden fascination for bugs from my housemates and I.
Melanie

3 Responses to Vinegaroon from Indonesia