Bug infestation in living room
February 3, 2010
These bugs have started showing up about 2-3 weeks ago maybe 10-20 a day. Recently there have been 100 a day maybe. At the start they all seemed to die within the same day of showing up (by themselves no pesticide used) and have never reached any other rooms. But now they have gotten to the front door entry way and into the basement. I sweep them all up everyday but they never seem to stop multiplying.
The bug look like flying ants but I have never seen one fly even though they have wings. They are maybe 1 cm long not very big at all.
I think they are coming out of the baseboards against a wall against the dinner room area, which is a split leveled wall (so only about 3 feet high). I have never seen these in my house before after living here for 5-6 years.
Dave Brown
Southern Ontario, Canada 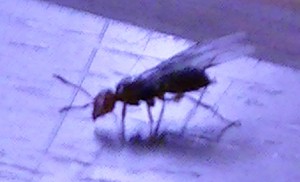 Hi Dave,
We agree that this appears to be a flying ant, more specifically, a Carpenter Ant.  We suspect you have a colony in the baseboards.  The colony does not produce reproductive flying kings and queens until it has matured, and we suspect that after six years in the home with your growing colony, it has matured to the point that the colony has finally produced a reproductive swarm.  Compare your image to the higher resolution images posted to BugGuide.

One Response to Flying Carpenter Ant: Swarming in Home