Praying Mantis
January 25, 2010
I looked everywhere for one of these mantis and I finally found one, he just showed up on my Grandmother’s porch my sister started screaming when she found him because she knew how long I’d been looking for one. I can’t tell if it’s a male or female and if it’s a chinese or European mantis, can you identify him?
to derek
Shamokin Pennsylvania 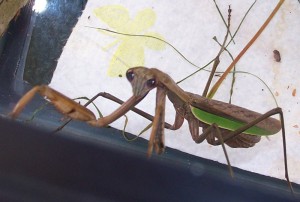 Hi Derek,
January is a most unusual time to find a Preying Mantis on the front porch and we would have thought that any mantises would have been killed by the frost or snow.  Your letter didn’t indicate, but we suspect you captured this Chinese Mantis in the autumn, and have been raising it indoors, in which case the life expectancy will be extended.  We believe this is a female Chinese Mantis, Tenodera aridifolia sinensis, though we are not certain.  Females are generally larger than males.  According to BugGuide, the Chinese Mantis can be identified are “Tan to pale green. Forewings tan with green along front margin. Compund eyes chocolate-brown at sunset, pale tan soon after sunrise and during the day.“

I caught her about the start of December, thanks for the info, I’m
planning on purchasing some in the summer, I let her go because I couldn’t
get  much to feed it, but they are very interesting  to watch I was pretty
excited when i saw her on your site, Thanks gain for your help. From Derek

Hi again Derek,
Should you ever decide to try to keep a Preying Mantis over the winter months when wild insects are scarce, you can purchase crickets from most pet stores since crickets are commonly fed to lizards and other pets.

I’ll remember that when I get one in spring, I wish I’d known that before
I set the other loose, thanks a lot I’ll be sure to take better  care of
the next one. Thanks, From Derek

One Response to Chinese Mantis