Is this a Shield Bug?
January 26, 2010
Image 1.I first thought this was a Shield Bug, but am not so sure especially the hind legs?
Image2. Large 2inch beetle?
Image3. What type of Assasin bug could this be?
Many Thanks
Jeff Keyes
Jeff @sportsmancreek.org
Grafton New South Wales Australia 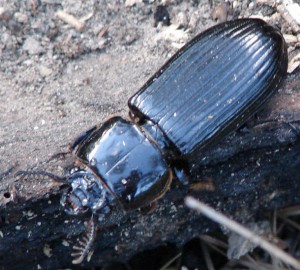 Hi Jeff,
We have already chastised you for sending us three images and a list instead of a more descriptive letter, but your submission has provided us with one of our more entertaining links in a long time.  First we will identify your beetle, which is a Passalid Beetle.  In North America, they are also called Patent Leather Beetles or Bess Beetles, and they live in colonies in rotted wood where mated pairs care for and communicate with their young.  According to the Rainforest Insects of Australia website:  “Passalid beetles are found particularly in wet tropical and subtropical forests where they feed on decaying wood.
Many are large and shiny black with ‘waists’ between front and back sections.
They are of particular interest because they live in semi-social family groups, with parents caring for and feeding their young.
The young larvae lets its parents know where it is by rubbing hind and mid legs together to produce a sound.
The adults (which rub hind wings against abdomens in reply) then chew up wood for the larva to feed on.
Their presence in a log can often be detected by the presence of large piles of sawdust collecting beneath the log.“ The Csiro entomology site of Australian insects lists two species, Pharochilus rugiceps, the Common Passalid Beetle, and the Giant Passalid Beetle, Mastachilus quaestionis.  Alas, we are unable to tell you which species you have submitted.

And now for that interesting link we promised.  Upon trying to research a species name for an Australian Passalid Beetle, we located a page with an Xray of a human chest and the title:  “Bronchial beetle  D J Serisier, M Singh, S D Bowler + Author Affiliations  Department of Respiratory Medicine, Mater Adult Hospital, South Brisbane, Queensland 4101, Australia”  The accompanying text reads: “A 74 year old man presented to hospital after waking with chest discomfort and haemoptysis, and left lung collapse was seen on the chest radiograph (fig 1). Twelve years earlier he had undergone laryngectomy and postoperative radiotherapy for laryngeal squamous cell carcinoma and had a permanent stoma. He had a smoking history of 35 pack years. New endobronchial malignancy was suspected, but bronchoscopy revealed the cause of his left sided airway obstruction to be a 4 cm beetle (fig 2)! Chest radiographs taken after removal of the beetle demonstrated lung re-expansion. The beetle was later identified as a Passalid beetle, species aulacocyclus, a species that resides in rotting logs.“ After posting an image of the beetle, the story continues with: “During the day preceding his symptoms the patient had been working in his yard, chain sawing trees. It is likely that the beetle became attached to his clothing and that night crawled through his open tracheostomy while he was sleeping, becoming wedged in his left main bronchus. He subsequently awoke with the sensation of ‘something scratching in my chest’, a description only fully appreciated in retrospect.  …  Our patient has been advised to cover his stoma while sleeping. Although further unexpected Passalid beetle inhalation is highly unlikely, there are many other ‘creepy-crawlies’ to beware in subtropical Australia!” Though we cannot positively identify which species of Passalid Beetle you have submitted, we have been highly entertained.  We also followed up on the species mentioned in the Bronchial Beetle story, and found and Oz Insect page on Aulacocyclus edentulus.

Dear Daniel.
Firstly, chastisement accepted and respected! I am amazed that my email got through as I live in a fairly remote area and my laptop is powered by the sun. I have a wildlife refuge and am putting together a composite list of all creatures great and small. Please check out www.sportsmancreek.org and the corresponding blog site http:// sportsmancreek.wordpress.com/ which I update as much as possible. The internet is such a powerful tool and your found link to my beetle is totally amazing! And yes, I have heard them communicating under bark of Ironbark trees. Thanks, again for your interest and prompt response.
Kind Regards
Jeff Keyes.

Hi again Jeff,
Thanks so much for providing information on your conservation website.  It has long been a fantasy here at What’s That Bug? to apply for a grant to go to Australia since there are such amazing contributions to the website from down under, and there are also a wealth of Australian websites devoted to insects.  Your own project at Sportsman Creek is a noble effort and we wish you all the luck with the project.  Here in Los Angeles, our editorial staff is fighting its own battle to save the highly endangered and fragile California Black Walnut Woodland ecosystem, and our biggest problem is that the few remaining areas of this natural habitat are in highly desirable real estate areas, and speculation developers tend to have greater capital than preservationists do.  We want sun powered laptops.

Dear Daniel.
I appreciate the encouraging words. It, seems developers worldwide do have the “whip-hand”, for the present. I have over 40 logging trucks per day trundle their booty to the mills passing the front gate! However, we must persevere in seeking answers to long asked questions. If you guys make to Australia, there is an Open Invitation to Sportsman Creek wildlife refuge.
Kind Regards
Jeff