Bugs found in apartment
January 24, 2010
Hi Bugman,
I found two bugs near the crown molding on the floor of my apartment. I’ve attached pictures of the one. It is black on top with a beige sort of stripe, with a few white dots on it. The other bug I found had part of the beige stripe, but it was not as distinct.
Thanks, Phils Fan
PA 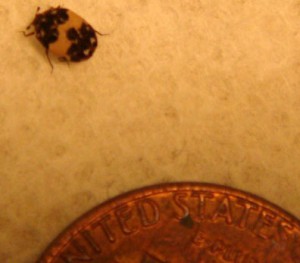 Dear Phils Fan,
This is a Carpet Beetle, Anthrenus pimpinellae.  We identified it on BugGuide where it is stated that it has a cosmopolitan distribution.  The genus page on BugGuide states:  “Season Adults mainly occurr in spring, but may be found the whole year round in heated rooms.
Food Adults feed pollen on flowers; larvae feed keratine and chitine, and may cause considerable damage on wool, fur, feathers, and natural history collections.“