Strange sideways/backwards-walking, jumping bug
January 4, 2010
Hi,
We say this strange bug in Coffs Harbour in New South Wales, Australia on Christmas Day. The weather was dry and it was warm. We were out of direct sunlight although the bug did sit on some of the wood around us in the sunlight looking for heat perhaps.
Assuming we’ve identified teh head correctly it has reddish eyes a white and orange coloured two-piece “back” and a segmented tail end with black and white stripes running across the segments.
The strangest feature were the two long antennae-type bits at the tail end (we thought this was the head first) which where dark with white strips and sort of feathery white ends.
It seemed to walk in any direction without turning round and jumped up to a metre very quicky.
I live in Scotland and have never seen anything like this so don’t even know where to start. It looks like a beetle of some sort!
Any ideas?!
alan
Coffs Harbour, New South Wales, Australia 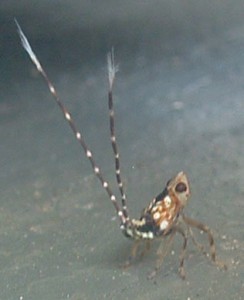 Dear Alan,
This was a challenge since it is an immature insect and they can be difficult to identify.  We have received similar images in the past that we identified on the Brisbane Insect website as Wattle Hoppers in the family Eurybrachyidae, but this specimen looked different.  We clicked around on the Brisbane Insect website a bit longer and stumbled upon the Palm Planthopper, Magia subocellata in the family Lophopidae, and it looks quite close. 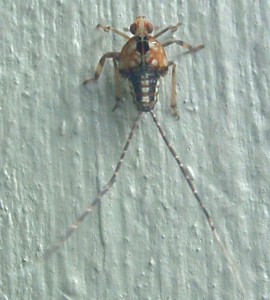 We then found an image of an immature Palm Planthopper, Magia subocellata, on the LifeUnseen website that corroborates our identification as does a Flickr posting. 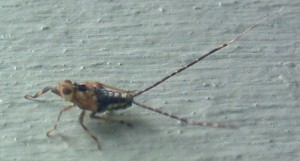 Hi Daniel,
Many thanks for this!  I’d done some insect ID many years ago but don’t have any of the resources.  Funnily enough I think I saw something resembling the adult Planthopper closeby while we were entertained by the wee fellow.
Great work, hopw you have a great 2010. J
Cheers,
alan

Homopteran and Flower Wasp from Australia

Flatid Planthopper
Tagged with → WTB? Down Under