Bird Mites?
December 22, 2009
After awaking two mornings in a row after a restless night feeling like something was crawling all over me, I took a close look at the bed sheets and found these little critters crawling everywhere.
After washing and bleaching the sheets and vacuuming and steam cleaning the carpet, they returned the next morning!
Comparing my photo to photos of ticks found on the internet, I was convinced that they were ticks. After speaking to a few local pest control companies, they were sceptical at first until they saw the photo and also believed they were ticks.
One company suggested that the behaviour wasn’t consistent with ticks. They did not attach when biting, and they only appears upstairs, even though our dogs only every stay downstairs. He suggested that they could be bird mites.
Then I came across your site, and saw Bernard from South Aftrica’s post titled “MITES CRAWLING ON SKIN IN SOUTH AFRICA”, with a picture almost identical to what I’ve seen.
Mark S.
Melbourne, Australia 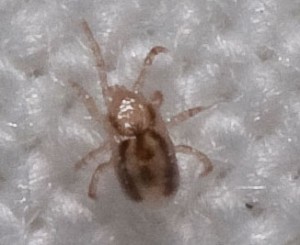 Hi Mark,
One of your photos does look identical to the Mite in Bernard’s images from South Africa, but the third image (though we are posting it second) looks like it might be another species.  Possibly that individual is engorged with blood.  As we indicated to Bernard, we do not have the necessary qualifications to properly identify Mites to the species level, though Bird Mites would be a strong possibility.  In November 2008, we posted an image that might be a Tropical Fowl Mite, Ornithonyssus bursa, and we provided a link to an Australian Website on that Mite.  Perhaps an acarologist will chime in at some point, and we would recommend that you post a comment to your own letter so that you will be informed of any further comments from our readership. 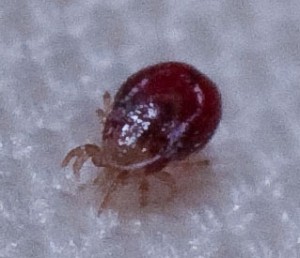 Crane Fly with Mites from Tasmania

Possibly Red Spider Ant Alate not related to Skin Condition
Tagged with → WTB? Down Under