No Idea
December 18, 2009
Hello. Found this bug in east of Napa. It was about and inch and half long. Very docile.
Paul
Napa County, California 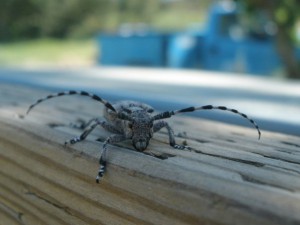 Dear Paul,
We are nearly certain this is Synaphaeta guexi, a Flat Faced Longhorn Beetle in the subfamily Lamiinae.  It it one of the Longhorn Borer Beetles in the family Cerambycidae.  We found a nearly identical view on BugGuide, but sadly, there is no information on the species.  One posting on BugGuide calls it the Spotted Tree Borer.  One posting to BugGuide from November 2009 states:  “this is indeed an uncommon beetle that seems to consistently evade experienced insect enthusiasts: ALL of its images we have on BG to date have been posted by first-time contributors!”  There are also some images on the BugShutterbug website.  It appears we are currently experiencing some difficulty with new images appearing live, and we hope this is quickly remedied.

I’d agree, though this is certainly not the best angle to tell conclusively….They are not terribly small beetles from what I understand.  Was a size estimate given?
Eric

An inch and a half.
That fits, you have my full endorsement:-)
Eric