lime green butterflies in Missouri
December 17, 2009
Can you tell me anything about these beautiful butterflies? I’ve lived in Missouri all of my life and have not seen them before, or since, I took these photos.
Catherine Dukleth
Clarence Cannon Nat’l Wildlife Refuge – Missouri

Hi Catherine,
We were going to write that Missouri is sure warm this time of year until we realized your photos are dated from September.  The larger butterflies in your awesome photo are Cloudless Sulphurs, Pheobis sennae, a tropical species that flies year round in the southern United States where it has naturalized.  It has also naturalized in Southern California, no doubt due to the cultivation of cassia, the larval food plant.  According to BugGuide, the range is the “Southern United States; often migrates north in late summer/fall, sometimes reaching northern states and southern Ontario (see US distribution map).  Permanent resident in the tropics, occurring south to the tip of South America.”  The smaller butterflies in your photos are probably members of the genus Colias, but we cannot identify the exact species without a closer view.  Several species, including the Clouded Sulphur and the Orange Sulphur,  fly in your area from spring through fall, and the caterpillars feed on clover and other legumes.  Your photos depict mud puddling or a puddling party where large aggregations of butterflies gather at mud or wet soil to drink.  They obtain nutrients including salts and amino acids from the activity.  Wikipedia has a page on mud puddling. 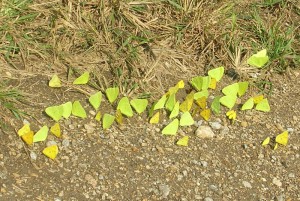