Mantis – Violin type
December 11, 2009
Dear WhatsthatBug, I found a type of Mantis in my house sitting on a barsilian rain stick at the end of November 2009. (Just a few weeks ago). I live in the South of France. The house is about 120 meters above sea level and 15 kilomters from the sea. The temperatures indoors are about 21 C at night. The rain stck which I have had for about 12 years – sits in a south facing window and with the sun the temperature would reach 28 to 30 on a sunny day. We have lots of green mantis here – I initially thought the photo was a green one turing into some hybernation state. But I dont think so.
The scale is the main part of the body is about 3 cms long and the the legs streach across about 5 to 6 cms. The rain stick – could it have hybernated and come out after about 12 years. I spent 10 years around Sao Paulo and other parts of Brasil and never saw the likes before. It looks like an Violin Mantis, but whatever it is it is beautiful. I appreciate any comments and advice on identification. Many thanks.
R. Reed, Le Muy, Var, France
South of France Nov 2009 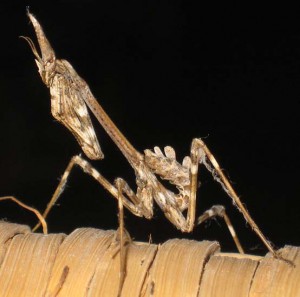 Hi R. Reed,
This is an immature Conehead Mantis, Empusa pennata, which we identified on the Wild Side Holidays website. According to the website:  “This species of mantis, although similar in size to the common European Praying mantis (Mantis religiosa), is easily distinguished by the protrusion from its crown. Both male and females, even from first hatching carry this tall extension giving them a very alien appearance. They live in areas that are warm and dry and use their cryptic colouring of either greens and pinks or various shades of brown to keep them hidden from predators.”  The site also indicates:  “The life cycle of a Conehead Mantis (Empusa pennata) is unusual amongst the European mantids as it hatches in the summer time, remains as a nymph through the winter and does not reach adulthood until the following spring. The ootheca (egg case) is attached to a plant stem and contains around 30 eggs. When the temperatures are right the tiny (1cm) nymphs all hatch at the same time and quickly disperse. From this point until mating in the following year they lead a solitary life. … (A similar coloured mantis Empusa fasciata exists further east around the Mediterranean but does not occur in Iberia.)“ Earlier this year, we posted an image of Empusa fasciata from Macedonia. 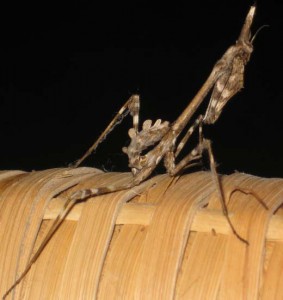