Stone Grasshopper from Namibia Update: We've produced the first draft of our book

Mottled umber moth
November 29, 2009
Hello.
I found a wingless moth that turned out to be an Mottled Umber Moth after I looked it up on the net. From what I gather they’re local to the UK. I’ve never seen a wingless moth besides what I’ve read in books so was surprised to see this insect. I have been collecting and observing insects for years and I’ve never seen one. My question is, could this be an introduced species or do they also live in the states? I took a few good macro shots of her so you should be able to tell if this is one introduced from the UK or of a different kind that’s local here (California).
Location info: She was sitting still on a banister pole at around 10:00 am. The surrounding trees are Maple and Black Locust. I believe she came out of the maple leaf litter and dirt on the ground in front of the porch which is where we released her after taking photos. I think its been around 40F at that time in the morning. The moth could have fallen from the maple which has just lost most of its leaves.
If you need any more info let me know.
Molly Zeta
Dunsmuir, CA 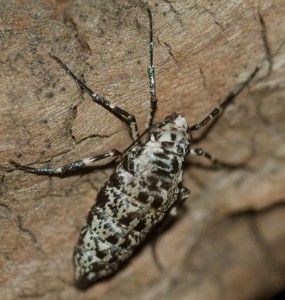 Dear Molly Zeta,
It does appear that you have a Mottled Umber Moth female, Erannis defoliaria, and we found the APHIS Invasive Species Website that indicates it is an invasive exotic, but it doesn’t indicate where it has been found.  We are going to copy Stephanie Dubon at [email protected] to verify the identification and also to report the sighting.  Wikipedia also has a page with nice photos. 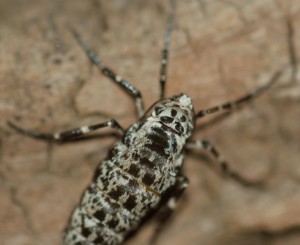 Hi again Molly,
Though it might not be possible, we would encourage you to try to locate the specimen in question again.  APHIS likes to have actual specimens from which to identify.  Hopefully we will hear back from Stephanie soon.

I know you’re busy but I have another question. Is there any particular light bulb I can use for attracting these insects so I can collect them? I know the white sheet and lamp trick but is there a light that will work better or will the sheet/lamp and a plain light bulb do?
I will collect as many as I can. Do you think they would want them sent live or frozen and preserved in alcohol?
Thank you for your time, I’ll help the best I can.
Molly

Hi Molly,
If you collect specimens, they can just be killed and allowed to dry.  Do not put in alcohol.  Since we don’t collect, we will contact Julian Donahue and Eric Eaton to find the best light to use for collecting at night.

Eric Eaton Responds
Hi:
Hoping Julian can address this better.  Plus, I am insanely busy….Insects are preferentially attracted to the UV spectrum, so blacklights are best.  Mercury vapor draws insects from long distances, but ultimately, UV lights are most attractive.  Still, the average person gets plenty at the porch light:-)
Eric

Julian Donahue talks about black light moth collecting
Since I don’t know what a “Mottled Umber Moth” is, my reply will have to be fairly generic (but see last paragraph)

Eric succinctly summarized the situation. Let me expand upon his comment.

There are two kinds of “black” lights: the kind with a filter that looks essentially black when turned off (the kind used in light shows to be relatively unobtrusive while making the right kind of objects “glow,”, and the ulfiltered kind, which look pretty much like a standard fluorescent tube.

We generally use 15-watt fluorescent black lights: they are more portable, and the light source is more localized. This is placed against a vertical white sheet (well-bleached, so that it “glows” in the black light) on a wall, a vertical frame, or draped over the hood and windshield of a field vehicle. I prefer the unfiltered kind, because it is easier to see what’s coming to the sheet without the aid of a flashlight/headlamp.

The collecting surface (light + sheet) should, where possible, be placed facing downwind, as moths are more likely to fly into the wind. No wind at all is a big help; other optimal conditions include (a) no moon and (b) high humidity.

Incandescent lights or gasoline(Coleman) lanterns are often used in conjunction with a black light, as they are often more attractive to microlepidoptera, if that’s what you’re after, and you don’t have to resort to using a flashlight as much.

MV lamps and sunlamps are often used by heavy duty collectors, but they are expensive, often require special fixtures and special equipment (e.g., generators if being used in the field), and run so hot that you can get a bad burn from them if you’re careless. Plus there’s a risk to the eyes, so I don’t recommend their use by the inexperienced.

And remember that about 25-30% of the moth species (at least in California) are not attracted to light at all! They tend to be either diurnal or leafminers, or both. The only way to collect them is by rearing or beating or, in some cases (e.g., sesiids), using pheromone traps or other specialized attractants.

I’ve just looked at the image on your website, and can state that all the above information is worthless for wingless female geometrid moths such as the one pictured, but it should work for males of the species.

There are a number of resident, native, geometrid moths with wingless or flightless females, many of which are active as adults in the winter or spring, so I wouldn’t become too alarmed until an expert has a chance to examine a specimen. Unfortunately, Doug Ferguson, the USDA geometrid expert, died recently. You might try Jerry Powell, UC Berkeley, who described a wingless geometrid from the east side of the Sierra Nevada, as I recall.

Without access to the collection, I seem to recall that California genera with flightless females include Yermoia, Alsophila, and Paleacrita (the last two are the Fall and Spring Cankerworms, respectively). There are undoubtedly others, and the females of some species, if flightless, may still be undescribed.

Update from Molly
February 27, 2010
Mottled umber moth Sorry to bug you again…….
OK I found a male moth yesterday and put it in the freezer. It doesn’t have the exact color patterns I see on the Internet but it has the same fringe on the bottom of the wings and matches the basic shape of an adult mottled umber moth. This particular moth is one of the more drab looking variations. Get back to me on where I should send the specimen.
Molly

Hi Molly,
We hope you can send us a photo of the male moth for our website.  You can contact the United States Department of Agriculture Animal and Plant Health Inspection Service or APHIS at http://www.aphis.usda.gov/about_aphis/ .  In the past, we have had contact with Stephanie Dubon about invasive species.  You can try contacting her via email at [email protected] .  In California, the USDA is kept pretty busy, and there is an Invasive Pest Website at http://www.hungrypests.com/ and they can be emailed at [email protected] for additional details.

One Response to Female Mottled Umber Moth!!! In California???