Bug Identification
October 14, 2009
Photographed this bug found on my tent tarp in the morning. I was camping in early July in Kootenay National Park in the Marble Canyon campground.
The bug was about 2 inches long and remained motionless even as we tried to move it from the tarp.
Thank you! Katherine
British Columbia, Rockies 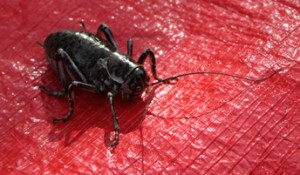 Hi Katherine,
This is a Mormon Cricket, Anabrus simplex, a species of Shield Backed Katydid.

Correction from Eric Eaton
Daniel:
The “Mormon cricket” from British Columbia is actually a different insect altogether.  It is one of the “hump-winged grigs” in the genus Cyphoderris.  They represent an entire family by themselves (Prophalangopsidae).  Neat find.
Eric