Catapillar or worm?
October 4, 2009
This was found in southern Wisconsin on a grape vine. It is soft to the touch, even though the spotted outside looks like a “shell” When it stretches, it extends out of the “shell” Very different from anything we have ever seen before
Cora Purdue
Southern Wisconsin 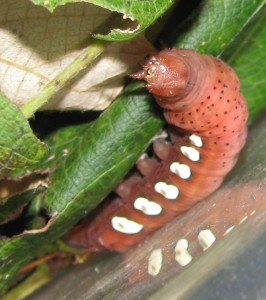 Hi Cora,
Your caterpillar is a Pandora Sphinx Caterpillar, Eumorpha pandorus, and it is commonly found on grape vines.  There are also green and brown color variations of the caterpillar.