Biggest Bug I’ve EVER seen….
September 26, 2009
Seen in San Pancho, Nayarit, Mexico on 9/18/09 This monster FLEW onto a wall, crawled down and was attacked by a toad. The beetle clamped on to the toad’s head and the toad hopped around like crazy for a few seconds and released the bug. Markings on the back of the beetle were orange and brown. The bricks that the beetle was resting on were 4″x11″ so you can see how large this bug is. Can’t find it on any website…any idea what it is?
Joslin
Nayarit, Mexico 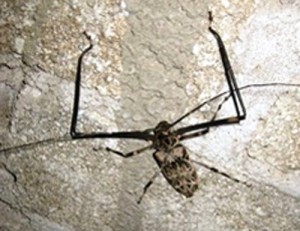 Hi Joslin,
We post images of the Giant Harlequin Beetle, Acrocinus longimanus, whenever we have an opportunity.  This tropical species ranges from Mexico south into Brazil.  We wish the photo you sent with the toad had better resolution as we really can’t see much.