Unknown Larvae Formations
September 24, 2009
We live in central TN and found these larvae formations around our driveway after heavy rains. Mostly seen in circular and abstract formations but always in clusters, never single larva alone. They also seem to stay in one location for long periods of time after patterns are formed. Their exterior has a translucent appearance rather than solid color and has a black tip or end. Do you know what this is?
Thanks for your help – Shannon
Central TN 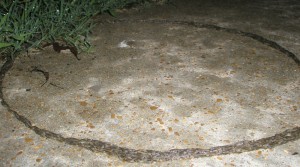 Hi Shannon,
We contacted Eric Eaton and here is what he had to say:  “Hi, Daniel:  Well, these must be the dumbest larvae in history to be going in a circle.  LOL!  They are the larvae of some kind of dark-winged fungus gnat, family Sciaridae.  The larvae of some species are well-known for their occasional, spectacular mass movements.
Eric“ 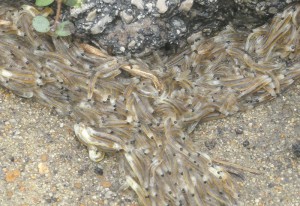