Bug on goldenrod
September 13, 2009
Photographed this guy/gal on a goldenrod plant along driveway–think it’s gorgeous and would like to know what I’m admiring. Also want to enter photo in competition and need ID to accompany it.
Sue C
Southern Maryland 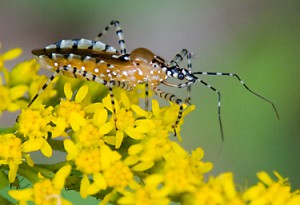 Hi Sue,
There is an entire ecosystem that thrives when the goldenrod blooms, from the nectar and pollen seeking creature, to the predators that prey upon them.  This is an Assassin Bug in the genus Pselliopus, probably Pselliopus cinctus.  According to BugGuide it is often found where insects visit flowers.

Thanks so much for your reply.  I sort of thought it was an assassin bug based on what I could get from my insect guides.  Sue

Assassin Bugs from Ecuador, one with Fungus Infection

One Response to Assassin Bug