Earwig tail, bluish wings, and attack stance
September 7, 2009
My daughter found an interesting bug. It is as big as a yellow jacket, has an ear wig tail, and has wings. Although didn’t fly away from us. As we were taking pictures the insect went into several attack stances by holding its front and middle legs at us in a curious karate kid type attack stance. I originally thought it to be some type of wasp but the pincher type tail has intrigued me.
The Freeman’s
Central Virginia 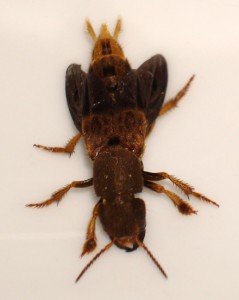 Dear Freemans,
This is a Rove Beetle.  Though we cannot say conclusively that it is a certain species, in our opinion it greatly resembles Platydracus maculosus which is pictured on BugGuide.