What kind of moth?
September 6, 2009
This unusual moth (to me, anyway!) has been resting on our covered patio during the daylight hours for several days. So far, I have not been able to find a close match…
Thanks!
Deb
Beaumont, Texas 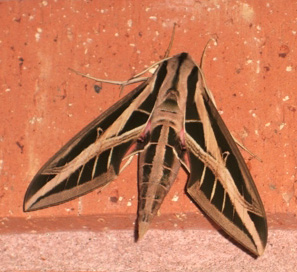 Hi Deb,
There are two closely related moth species that both range in Texas and that look quite similar to one another.  We believe your moth is a Banded Sphinx, Eumorpha fasciatus and you can compare you moth to the images on Bill Oehlke’s awesome website.  The other species is the Vine Sphinx, Eumorpha vitis, and it can also be viewed on Bill Oehlke’s website.  According to Bill Oehlke, the two moths can be distinguished from one another in the following manner:  “The upperside of the moth [Eumorpha vitis] is dark pinkish brown. Each forewing has a lighter brown band along the costa, and sharp pinkish white bands and streaks. The hindwing has a pink patch on the inner margin, but lacks the pink along the outer margin, distinguishing it from fasciata.  Note the large brown ‘parallelogram between lowest of three striga upwards toward the transverse lines. In E. fasciatus this same area is very small, almost non-existent.”  We are unsure of the parallelogram in question, hence our uncertainty as to the exact species.