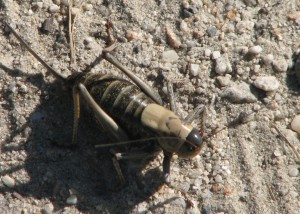 Hi Doug,
This is a Shield Backed Katydid, most likely a Mormon Cricket, Anabrus simplex, which can be compared to individuals on BugGuide.  Your specimen is a female as evidenced by the swordlike ovipositor.

Update from Eric Eaton
September 6, 2009
Daniel:
The mormon cricket is pretty easy, plus this was “their year” apparently with lots of posts popping up in Bugguide from the Rocky Mountain states and Pacific Northwest.
Eric