Long legged large beauty
August 31, 2009
Visiting a friend on Deer Isle in Maine, I found this creature on her screened in porch. It was late August. Not able to find anything close to it in my Peterson guide. Pretty large – It’s body alone was about 2 1/5 inches long. Any ideas?
Gianna
Deer Isle, Maine 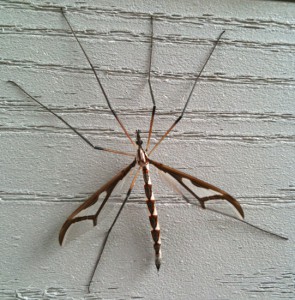 Dear Gianna,
Your spectacular photograph of the spectacular Giant Eastern Crane Fly, Pedicia albivitta, is a wonderful addition to our site.  According to BugGuide:  “This species is one of the largest [Crane Flies] in northeastern United States and Canada, the other being Tipula abdominalis.”  Since it is the first of the month, there is always a bit of a lag time for our new postings to have images show live.

Crane Fly and its “sting”