Large, Metallic Blue Ant-Like Insect in Germany
September 1, 2009
I found this creature a few months back and haven’t been able to identify it.
I was walking in a hilly wooded area (deciduous) in May, 2009 on the warmer, south side of the hill. It had been a bit rainy and already warm for a few weeks after a very hard frost toward the end of winter. At this time, apple trees and wild garlic were blooming…
The animal in question was ~4-4.5 cm in length and fairly quick-moving.
I watched it for a few minutes until it was clear of the footpath/road, took a few pictures (including the horribly blurry one for scale) and left it be.
I understand that you get quite a few requests for IDs, but if you get a chance, I’d really like to know what this was. Thanks!
Cori
Kreutzwertheim, Germany (Spessart Forest, Northwest Bavaria/Northeast Baden-Württemberg) 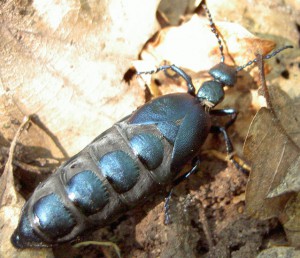 Dear Cori,
This is some species of Blister Beetle.  It greatly resembles the North American Oil Beetles in the genus Meloe which can be viewed on BugGuide.

Dear Daniel,
Thank you for such a quick response! – I would never have guessed to call it a beetle. I believe I will ask one of the local beekeepers and see if it is one of the varieties that uses bees for reproduction. – Either way, they might know more about the local insect populations. I don’t know why I didn’t think of it before.
Thank you again,
Cori

Hi again Cori
Should you happen to find out any additional information on this fascinating Blister Beetle, please provide us with an update.

Will do!
I’ve been in the research field (geology) long enough to know that you mean that! Yay for other people doing the legwork … but don’t forget to double-check it! … 🙂
Best wishes,
Cori

I know that in Germany there are at least 14 members of the genus Meloe. But this should be Meloe violaceus at least if the colour of the beetle from the picture is blue not black with blue glister/gloss (don’t know which one of these words is proper). Little verified link about the species appearance.
http://www.zin.ru/ANIMALIA/COLEOPTERA/rus/melviomk.htm
Mardikavana

One Response to Blister Beetle from Germany