Green Walking Stick?
August 25, 2009
I found this “little” bugger by a pool in the DFW area of Texas. He very calmly sat there for 10 minutes while I went to fetch my camera. It was about 6 inches long.
Katie F.
Texas 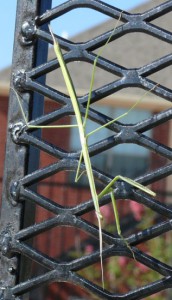 Hi Katie,
We are quite excited to have received your letter at this point in time as we are currently working on the Bug Love section of our book that is devoted to mating insects.  This is a female Brunner’s Mantis, Brunneria borealis. We first posted a photo of a Brunner’s Mantis in September 2005.  According to BugGuide, it is also known as a Walkingstick Mantis (hence your question) or a Northern Grass Mantid which is a bit odd since it ranges in:  “Southeastern United States: North Carolina west to Texas.”  The reason your letter has us excited is that BugGuide indicates Brunner’s Mantis:  “reproduces by parthanogenesis; males are unknown.”  This of course demands considerable more research on our part.  Parthenogenesis is virgin birth, and a female Brunner’s Mantis is able to produce an ootheca with viable eggs without ever contacting another member of her species.  There was a study on Brunner’s Mantis in 1948 by Michael James Denham White entitled The Chromosomes of the Parthenogenetic Mantid Brunneria borealis in Evolution, vol. 2 (1948), pp. 90-3 and we are trying to get a copy of that paper.   White’s interest in parthenogenesis continued in his study of a South African grasshopper, Moraba (later Warramaba) virgo.  An online biography on MJD White states:  “In an earlier study in Austin on the mantid Brunneria borealis White had described an exclusive parthenogenetic reproduction system and had pondered on the genetic consequences of parthenogenesis for a number of years. He sent off a short note to the Australian Journal of Science about his discovery, which was published in August 1962. White enthusiastically took Ken Key, his taxonomist colleague, to look at the all-female population. Key was initially skeptical that this would prove to be a valid species. However, he was soon convinced that no males were present and provided a suitable taxonomic place for the species, with a joint publication in the Australian Journal of Zoology in 1963.”  The biography makes a point about White’s pronunciation of the word “femalllllllllle” during his lectures.

Parthenogenic reproduction, though rare in insects, is not unique to the Brunner’s Mantis.  Many Aphids undergo both sexual and asexual reproduction at certain seasons and under certain conditions, but the fact that there are no known male Brunner’s Mantis specimens brings up some unusual questions.  We wonder if DNA analysis would reveal that all individuals are identical and originating with an Eve, much the way the DNA of plants started from cuttings are all identical.  Every single Sterling Silver rose is genetically identical since they have all been started from cuttings of the original specimen hybridized in 1957 by Gladys Fisher when she crossed Peace with an unnamed seedling.  The interesting case of the Brunner’s Mantis begs the question if there were ever males of the species.  It is possible that once the females developed the ability to reproduce without insemination, the then useless males vanished.  Without males to change the DNA with each generation, there can be no natural evolution or variation.