Female Diana Fritillary Butterfly
August 25, 2009
Hi Daniel,
My property abuts Cocke County in East Tennessee on one side and the Great Smoky Mountains National Park on the other.  I have to consider myself a lucky person in that for the past several years I’ve been able to enjoy this lovely beauty and her male counterpart each summer.  They, and many other butterflies (Pipevine Swallowtail and Great Spangled Fritillary also photographed this month), so enjoy the ironweed in my backyard.  In the spring my backyard is full of a variety of wild violets.
The attached article may be of some interest to you.  I was lucky enough to get this photo just a few minutes ago.
http://www.tennessee.gov/environment/tn_consv/archive/teinsects.pdf
Thank you so much for all your help over the years,
R.G. Marion 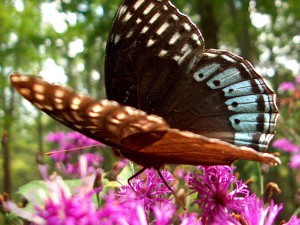 Dear R.G.,
In our humble opinion, the Diana Fritillary is one of the most beautiful North American butterflies.  We have also read that it is endangered, probably due to habitat loss.  The sexual dimorphism is especially marked in this species.

female Diane Fritillary
August 26, 2009
It never falis, I see a new isnect in my yard, and it shows up on your site! I am 99 % sure I caught and released a female Diana Fritillary yesterday. She was stuck in our garage, trying to “get out” of the window. I put a cup over her, and slid some paper underneath. She was healthy and seemed very robust. The BUT in all of this is we are in southeastern PA. According to the info on the internet, this is not her range. But I got a close look at her, and she was a Diana Fritillary. We have tons of wild violets in our yard, which may provide her with a food source.
Lee Weber

Hi Lee,
We are very happy to hear we don’t fail you.  According to BugGuide, the Diana Fritillary is found in “Souther [sic] Appalachian region, also Ozark Mountains in Arkansas, Missouri. Rather local and rare.“ BugGuide has reports from Virginia.  As we have stated in Mitigated Negative Declaration comment letters in our own Mount Washington, Los Angeles neighborhood, wildlife does not recognize arbitrary boundaries between properties, and the same goes for state and international borders.  You are in the Southern portion of Pennsylvania.  We are linking to a page with nice photos and a distribution map showing West Virginia, Virgina and the Carolinas.  It is entirely possible there is an undocumented population in your area, though you did not indicate if you live in a wooded area.  Dare we even entertain the possibility that global warming could be contributing to range expansion? or that Hurricane Bill storms may have blown your specimen off course?  We wish you had supplied us with a photograph.  Though we do not want to doubt your powers of observation, you might also compare images of Red Spotted Purples to see if that could be what you saw.

female Diane Fritillary
First, sorry for the typos. Second- darn, you could be right. The funny thing is, I almost let her beat against the window so I could get my camera!! Sad, huh? The reason I didn’t is because there are quite a few spiders in the windows of the garage. One lucky bugger snagged a cicada. I didn’t want her to get trapped. Anyway, it could have been the Red Spotted Purple. It did seem to be a bit larger than the little orange fritillaries around here. And the storms that have ripped through here lately would certainly blown a butterfly off course. Thanks for the response. Love your site!

One Response to Female Diana Fritillary