Albino Fly?
August 16, 2009
This bug was filmed in keystone heights florida. What is it? It looks like a fly, but not. I did save it after it died and still have it.
I couldn’t get a decent photo of it, but here is a movie
http://hartmanndesign.net/whitebug.mov
Clair
Northern Florida 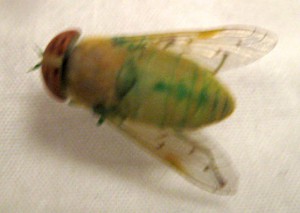 Hi Clair,
This is Chlorotabanus crepuscularis, a species of Horse Fly.  According to BugGuide:  “Identification  Body pale green, eyes and thorax yellowish green. The only green tabanid in NA.  Range  An eastern species occurring south of a line from Delaware to southern Texas.  Habitat  Larvae predaceous, usually in soil at edge of water and in floating vegetation, occasionally in forest soil.  Adults in vicinity of larval habitats  Season  In Florida, flying from mid-March to mid-September with peak activity from May to mid-July.  Food  Females feed on mammalian blood  Remarks  As with all the blood-feeding tabanids, the females are responsive to Carbon Dioxide. I caught over 500 females in one night with a trap baited with dry ice in coastal South Carolina. Will also come to lights at night.
Regarded as a pest species in Florida“