moth ID
August 14, 2009
Mike again. I thought you’d like this pic. The larger moth is a sphinx, but what is her friend? They seemed to be a happy couple, but obviously of different species.
Mike
Edgewood, New Mexico, 7000′ pinion forest. 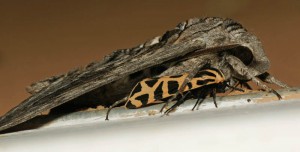 Hi Mike,
This photo of a Sphinx Moth and a Tiger Moth getting along is priceless.  The Tiger Moth is probably the Nevada Tiger Moth, Grammia nevadensis, and you may read about it on BugGuide.  Because of the angle of the photograph, the Sphinx may be difficult to get an exact ID from us and will probably require an expert, but it appears to be in the genus Manduca, probably the Five Spotted Hawkmoth, Manduca quinquemaculatus.  That may be researched on Bill Oehlke’s awesome website.

Yes, I positively ID’d the hawk moth as a five spot.  We have lot’s of them around here.
Mike