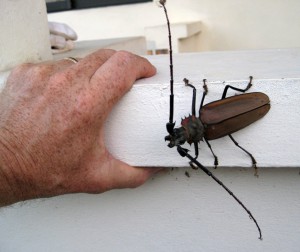 Dear Mr. Sticks,
This is a Root Borer Beetle in the subfamily Prioninae.  It resembles the North American beetles in the genus Derobrachus, but we have been unable to quickly unearth any possible species matches in Tobago.  Perhaps one of our readers will have better luck in the species identification. 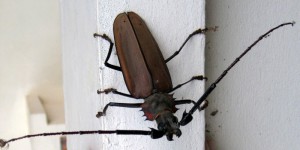 Daniel:
This looks like Callopogon (=Enoplocerus) armillatus. The common name appears to be Giant Longhorn Beetle; appropriate for one of the largest Cerambycids (up to 12 cm!). It ranges from Panama to northern Argentina, including Trinidad and Tobago. As you say, it is a root borer (Cerambycidae: Prioninae). Regards.
Karl

4 Responses to Unknown Root Borer from Tobago is Callipogon armillatus