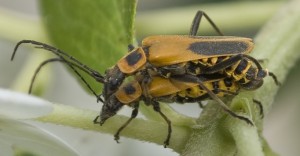 Hi Mike,
These are mating Pennsylvania Leatherwings, Chauliognathus pensylvanicus, also called Goldenrod Soldier Beetles.  They are a species of Soldier Beetle.  Soldier Beetles, Fireflies and Click Beetles are all in the same superfamily Elateroidea which is why they resemble one another.