Black Thin Waisted Insect
August 7, 2009
Like to know what kind of I think wasp this is. It is jet black and thin waisted.
Doesn’t matter
Long Island, New York

Hi again Doesn’t Matter,
The significant identifying feature of your Thread Waisted Wasp, according to BugGuide is:  “The blue-black body and silve[r] (sic)/gold patches are distinctive. The patches may wear off in older individuals (Troy Bartlett).”  BugGuide also indicates:  “Female digs burrow and provisions with a single large lepidopteran larvae. These are reported to include various moths from the families Noctuidae, Notodontidae (especially), and Sphingidae, and also skippers (Hesperidae).  The wasp is commonly found on wildflowers with large clusters of blossoms, such as Queen Anne’s Lace, from summer into fall. One frequently observes mating pairs on the flowers.”  We suspect this is a female prowling among the foliage for caterpillars to feed her brood.  Your wonderful photos represent the first time this species is represented on our site, to our best recollection. 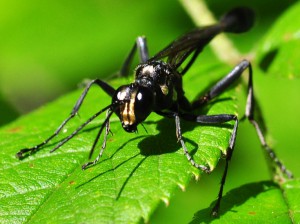