ID request
August 7, 2009
Hi there! I’m a huge fan of the website!
We’ve had these hanging around for about 2 months here, and I can’t figure out what they are. They are nocturnal and seem to like my lights at night. They’re about 2″ long. They hold their wings either up like in this photo or folded along their sides like a damselfly.
Mike
Edgewood, NM at about 7000′ in the pinion forest 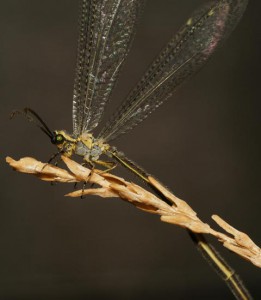 Hi Mike,
We have been getting in trouble lately for making assumptions, but we will tempt fate again and go that route.  This is definitely an Antlion in the family Myrmeleontidae and your photo is stunning.  We are assuming that since you said they were nocturnal, that this photo was taken at night with an electronic flash, which would explain the way the eyes have been reproduced.  We found a similar portrait on BugGuide that generated much internet chatter, but the wing pattern on your specimen is very different.  We suspect you may have an individual in the genus Brachynemurus which is described on BugGuide as:  “Apparently a commonly encountered genus. Large. Abdomen soft, slender, long, usually (or always?) extends beyond wingtips. Wings long, venation fine and net-like. Wings not strongly marked in most species for which photos available. Antennae clubbed.” Your individual definitely has the long abdomen.  BugGuide also indicates:  “Food  Adults reported to feed on small insects. Larvae predaceous.  Life Cycle  Adults mostly nocturnal. Larvae reported to be pit formers.”  The larvae of Antlions that live in pits are called Doodlebugs.  They are found in sandy soil and they wait buried in the sand at the bottom of the pit with only their jaws exposed, feeding on the hapless ants and insects that fall into the pit.

Thank you!  Yes, the photo was taken at night with a flash.  If they eat insects, that would explain why they hang around the lights.
Mike

Owlfly from the Dominican Republic