Dragonfly – Whitetail?
August 1, 2009
These big guys follow my mom around while she gardens all the time in the summer, I think mostly because she uproots the rocks around the garden’s edge and exposes a ton of little insects that all flee. This time she asked me to follow her around as well to get a good shot of one. I managed to catch this girl (I think) as she perched on top of one of the hanging flower pots that was taken down to be watered, though she was really flighty for almost 20 minutes before she surrendered. The picture turned out well enough to come try and find a match, and after some browsing on your site, I think this one is a common whitetail female. They are so pretty and they usually have no shame when it comes to saying hi to us.
Jere
South-east MI 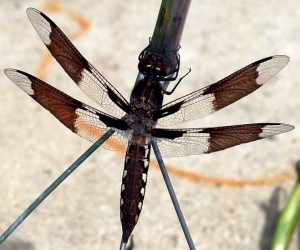 Hi Jere,
You are correct about this being a Common Whitetail, Plathemis lydia, but it is not a female.  It is a teneral male.  According to the University of Florida Dragonflies and Damselflies web page: “When naiads are ready for their final molt they leave the water and crawl onto the bank or vegetation where they will molt into adults. Much like a caterpillar emerging from a chrysalis, they will need to pump up their wings and allow their bodies to harden before they can be effective fliers. A newly emerged odonate is teneral (soft). A teneral dragonfly has glossy wings and the colors on the body are often pale. Several days after emmerging hardened completely and will have taken on the colors of an adult dragonfly.“ According to BugGuide on the Common Whitetail information page:  “Immature males have the same body pattern as females but the same wing pattern as mature males.” BugGuide has excellent photos illustrating the differences between male and female Common Whitetails.  Your letter contains some fascinating dragonfly behavior observations.