6 yr old “bug scientist” needs your help!
July 21, 2009
Hi,
Am writing this on behalf of my 6 year old son. He’s fascinated with bugs and has already declared his intention of becoming a “bug scientist” when he grows up.
He’s been on the lookout for a long time to find a critter worthy of posting here and was so excited when he found this spider. He had me out taking numerous pictures of it over the course of several days in hopes that we could get some good ones to submit to you.
We are in Aliso Viejo – just a few miles directly inland from Laguna Beach, CA and found this gorgeous, and very large, spider in the bushes outside my son’s YMCA center.Can you tell us what it is?
Mom of future “bug guy.”
Southern California 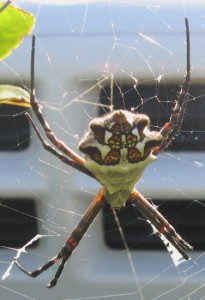 Dear Mom,
Your spider is a Silver Argiope, Argiope argentata, one of the Orb Weaver Spiders.  The species is found in the Southern states, Gulf states and California.  According to BugGuide:  “Orbweavers place a conspicuous zigzagging white silk banner in their webs called the ‘stabilimentum’ which can be used to identify the species. In this species four stabilimenta form a cross in the web of mature spiders. Juveniles of many species, including this one, spin a spiralling stabilimentum from the center of the web. The function of the stabilimentum is not fully understood. Hypotheses are; that it stabilizes the web, or makes it more apparent to birds which will thus not fly into and wreck it, or it reflects light to attract insect prey, or perhaps most likely helps to camouflage the spider in the web.“

Who Smashed the Golden Orbweaver???