Black Bee or Fly nesting in multiple tree branches
July 22, 2009
I have about 50 to 100 what I believe to be bees that have taken over a Magnolia tree 2 years running in Maryland. The appear to have shown up in the last few weeks. They do not care that I am observing them and do not approach me. They also have a these pod like nest all over the tree limbs that appear to be killing the leaves on the tree (black mold like takes over and then kills the leaf). If they behave like last year they will multiple quickly and will make it really difficult to eat on our patio. The last picture is a fly swatter but the insect was only stunned and few away after the picture.
Scott
Frederick, Maryland 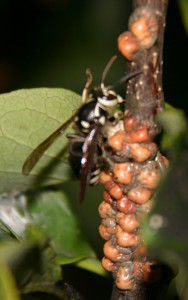 Dear Scott,
You have two different insects and only one is a real problem.  The Bald Faced Hornets, Dolichovespula maculata, are paper wasps and they build a nest of chewed wood pulp.  They are social wasps with a queen and they will defend their nest, potentially stinging the threat multiple times.  They are visiting your magnolia tree to feed on the sticky honeydew excreted by the Magnolia Scale, Neolecanium cornuparvum, that is infesting your tree.  the bumps on the branches are the mature female Scale insects and the sooty black mold is growing on the sticky honeydew that is secreted by the Magnolia Scale insects.  Here is how the Ohio State University Factsheet on Magnolia Scale reads:  “The magnolia scale, Neolecanium cornuparvum (Thro), is one of the largest and most conspicuous scale insects known to occur in Ohio. Adult females may reach nearly 1/2-inch in diameter when fully grown. The scale is shiny tan-brown and smooth. As the scales grow, they are often covered with a white mealy wax. This wax is lost at the time that the crawlers emerge.”  Here is how the Penn State Entomology Page describes damage due to Magnolia Scale:  “Magnolia scale prefers attacking star magnolia, Magnolia stellata , cucumbertree magnolia, M. acuminata , lily magnolia, M. liliiflora and saucer magnolia, M. soulangeana . They also attack other cultivars but usually with less frequency. Scale insects damage plants by removing plant fluids. Heavily infested trees can be seriously injured or killed by this species. A reduction in foliage and flower production may result from an infestation. Twig and branch dieback may also occur. Twigs of the host plant that are normally light green appear enlarged and purple from a massive magnolia scale infestation. This soft scale also secretes large amounts of honeydew which gives the plant an unsightly appearance; black sooty mold develops on the sticky honeydew. The honeydew attracts large numbers of ants, wasps, yellowjackets, and other noxious insects.”  If you rid your tree of Magnolia Scale (see the sources we have linked to) you will also be rid of the Bald Faced Hornets.  See BugGuide for more information on the Bald Faced Hornets. 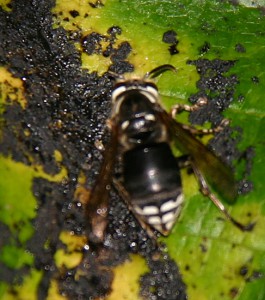 A Comment about Bald Faced Hornets
docile bald faced hornets?
July 23, 2009
I have to say that i am quite shocked about the recent post about bald faced hornets and magnolia scale. I work in a cemetery on Long Island NY and about three years ago we had a big problem with bald faced hornets, they were everywhere, and very nasty….without provocation….they would attack if you got ANYWHERE close, i alomst got hit in the face from a nest 25ft up in a tree….and they would always attack your face/head. Unfortunately they all had to be irradicated due to visitor safety. Curios why they would be so aggressive? Maybe the proxcimity to NYC! hahaha

One Response to Bald Faced Hornets and Magnolia Scale